In view of the potential risk to the environment from waste storage schemes, it is abso­lutely essential to provide for continuous inspection of the physical behaviour of a dump's body and that of its surroundings, particularly its sealing elements, and for the scanning of possible chemical changes in the ground water.

A base sealing system that complies with today's statutory regulations will require taking mainly those measurements listed in Fig. 1 for the long-term scanning of safety-critical operating data.

Measurements in the side sealing system are similar except that lateral displacement measurements are carried out instead of settling measurements, and strain measure­ments in the HDPE film take on special importance because here the film may be sub­jected to far higher loads than in the dump base, depending on the gradient of the side slope.

In addition to taking safety-critical settling measurements it is important for settlement of the dump base to develop uniformly and in accordance with expectations in order to comply with the nominal gradient specified for the drainage lines. Local settlements may lead, for example, to water being held back in the pipes where the solids entrained in the seepage water form deposits. Sinking of the dump body must also be monitored for the following reasons:

Using these methods the drainage system should be checked

The settlement characteristic of a dump body must also be monitored, of course, in ac­cordance with the specific terms of reference. The extent of a dump body's settlement depends inter alia on reaction processes and the site's growth; it may be sensible, therefore, to carry out settlement measurements at shorter intervals in order to be able to make a more reliable forecast.

One of the compulsory duties of dump supervision is to measure the total volume of seepage water. At the same time it makes sense to check periodically the amount of discharge from the various drainage pipes. A comparison of the amounts of water issu­ing from the various lines is a first pointer to partial failure of the drainage system. Evaluation of the total discharge of seepage water in conjunction with meteorological data (temperature, precipitation, air moisture) provides the basis for monitoring the dump's water regime. This and comparisons with other dumps can reveal, under certain circumstances, irregular storage and retention processes.

The most expedient approach is to conduct continuous measurements of the seepage water volume with simultaneous readings of its electrical conductance and pH-value.

This joint logging and evaluation of parameters allows you, for example, to conclude whether large quantities of rain water are entering the system. If the amount of seepage water rises immediately after the commencement of precipitation and if this is accom­panied by a parallel drop in conductance, checks should be carried out to see whether unpolluted rain water is getting into the drainage system. The continuously scanned data can be evaluated online by digital data acquisition and computer processing sys­tems.

Normally the build-up of seepage water inside a dump body goes unnoticed until seepage water escapes uncontrolled from the base or slope area or it is revealed in the course of construction activities. Here, too, regular checks with piezometers are re­quired. Steps should be taken, therefore, to equip each filled section or, in the event of lengthy filling breaks, every partly filled section with probes to check the build-up of seepage water on the dump base. Sinking the probe after installing the waste is prefer­able to pulling up the probe simultaneously as the latter leads to irregular, insufficient compaction of the waste in the area of the probe. On the other hand a borehole after the dump is filled may lead to a leakage in the base sealing system; this explains why such boreholes are only admissible by way of exception.

The probes are to be of filter design only at the dump base end; otherwise they must be designed as a continuous tube in order not to detect any false water levels caused by gas pressure or the build-up of water due to impervious layers inside the dump body. The bottom of the probe should be approximately 1 m above the seal. The only material that should be used for the tube is plastic (HDPE). The tube diameter should not be smaller than 4" in order to allow for seepage water samples to be taken with a sub­mersible pump.

At least three monitoring probes should be installed per dump section in order to identify the alignment of the water surface. The exact arrangement and number of probes de­pends on the size and layout of the drainage system.

The water levels in the probes are to be recorded continuously with a level logger or central data acquisition system; temperature, pH-value and electrical conductance are scanned simultaneously.

Temperature measurements in dumps are the exception nowadays. According to Ramke (1987), however, there are a number of reasons why it can be an advantage to know the temperature and temperature characteristic:

Knowledge of the temperature characteristic is thus a parameter that could be needed directly for the operation of a dump and which plays an important role particularly in the planning of refuse dumps and in the understanding of relationships.

The complete description of Geotechnical Measurements in Dump Engineering can also be downloaded here as a pdf. 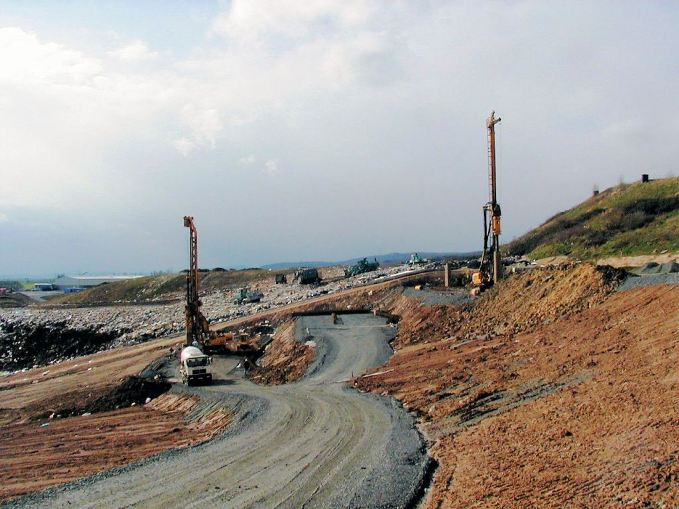