Every slope - no matter how gentle - represents a safety risk for men or buildings be­cause under certain circumstances it can give rise to a slide of lesser or greater velocity. Thus one of the duties to be performed by the engineering geologist and geotechnical engineer is to assess the stability of a hillside or slope in order to guard people from injury.

Often it is a very simple matter to determine the stability of a hillside from its appear­ance and a knowledge of its bed rock; often certain signs will indicate that a slope is moving, albeit slowly; and often enough slides have occurred and caused devastation before the experts have looked into a slope's safety.

Two approaches are usually taken to assess a slope's stability. The first is to conduct a mathematical stability analysis after careful exploration of the subsoil; the findings re­flect the momentary degree of stability. The second approach is to install a monitoring instrument that can identify

providing the basis for effective safeguards.

If a slope’s safety of about 1 or less in smaller sliding masses has been found out mathematically or by control, safety steps will be taken which will increase the safety to a degree as stipulated in our standards.

But often the volume of the moved mass is so big that safeguards are not possible. In such cases the state of the slope will be continuously controlled and in case of imminent danger for men and buildings appropriate precautionary measurements will be taken.

When controlling the state of a slope above all the time-related development of the slide is in the foreground. From the information about the movement’s velocity you can esti­mate the risk of the slope and if safety measurements will be necessary and which ones.

In 1995 the International Union of Geological Sciences (IUGS) has classified slides ac­cording to their velocity (see Tab. 1). These classes enable to reveal about the risk’s degree and to start precautionary measurements.

Often the mechanism of a movement cannot be recognized only by geotechnical ex­ploration, it must be found out by geotechnical measurements. Without knowledge of the movement’s development you cannot make a stability calculation. There are three different mechanisms: (s. Fig. 1): 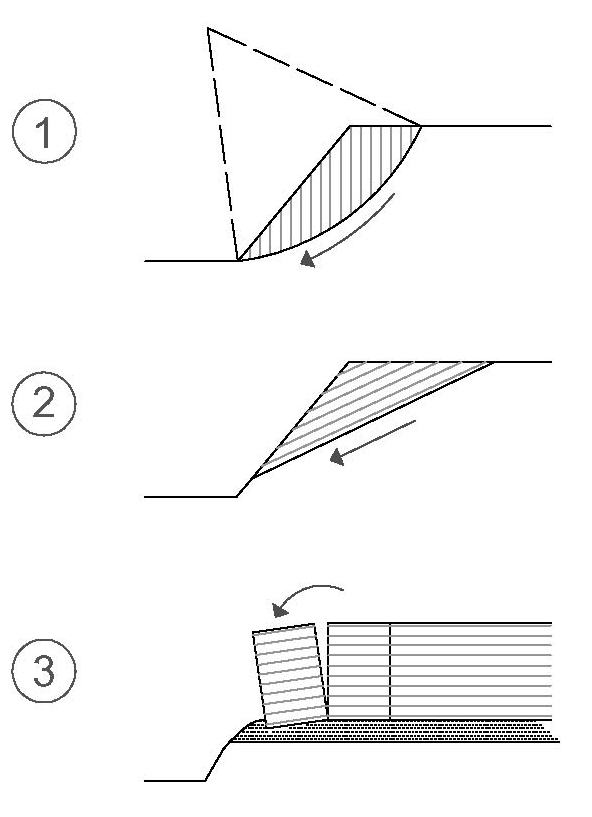 The use of instruments to monitor a slope can be planned all the better, the more that is known about the stability affecting factors that may be the cause of a slide. The most important of these factors are:

The geotechnical measurements listed under the particular items are aimed at monitor­ing and quantifying as many of the above mentioned sources of destabilisation as pos­sible.

The complete description of Geotechnical Measurements on Hillsides and Slopes can also be downloaded here as a pdf.